Multi-Fuel and Woodburning – The Correct Method of Fuelling

Recently we have had many customers at the Leeds Stove Centre asking if it is the right thing to burn wood on an evening and then add coal before bedtime, close down the air and slumber the stove overnight, or alternatively, to burn coal and then put on a log when they want a larger flame picture! This is not a good practice and will eventually lead to serious problems with both your stove and flue.

Why should I not mix fuels?

Primarily because Wood and Coal burn very differently; wood burns through a process of gasification whereby the volatile oils within the wood become heated, turn to a gas, mix with oxygen above the log and eventually combust. Coal on the other hand, is primarily a carbon burn whereby oxygen must enter and mix from below the fuel, as combustion takes place inside and not above the coal itself.

The differences between Wood burning and Multi-fuel Stoves 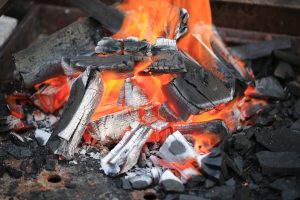 Typically, dedicated wood burners have only one air control, this will allow air to enter the stove, preheat in a chamber or baffle, where it will then be directed above the log where the volatile hydrocarbons are mixed with the intake of oxygen vigorously before combusting, heating more intake air and eventually up and out of the chimney.

A typical multi-fuel stove will have two air intakes; one situated at high level to accommodate the gaseous burn of wood and one below a riddling grade to accommodate low level combustion air for coal.

Why is it that I should not burn both fuel types together?

Option 1: Wood on top of Coal

If you try to burn wood above a bed of coal you will need to open the top air intake drawing air above the coal and not through it. When this happens the coal, which is burning poorly, produces high levels of carbon monoxide and carbon dioxide, in doing so our wood gasses, which should be bathed in oxygen, are now shrouded in the same fire suppressant that is in the black fire extinguishers. The effect is compounded by the adequate heat from the coal so the wood pyrolysis in the heat, volatiles hydrocarbons are emitted and become gaseous. Normally, these hot gasses mix with oxygen and burn with the yellow flame we associate with wood, however, in the reduced oxygen environment above a coal bed, the volatile gas emitted by the wood log will travel into the chimney where it will deposit as flammable creosote. The final problem when combustion temperatures and oxygen levels are too low, is that the later hotter stages of gaseous combustion will not effectively take place. During these later phases, carbon soot particles should be burned, if they are not they will exit the chimney as fine dust pollution harming our air quality and shortening our lives!

Option 2: Coal on top of Wood.

It is a fact that coal requires oxygen from below to burn effectively, think of bellows in a foundry.  Historically blacksmiths used bellows to pump air below the coal. Nowadays they inject neat oxygen or use a pumped fan. If we burn wood below a coal bed, we will have a situation where our coal is bathed in carbon dioxide leaving an incomplete burn. The second problem here is that wood produces lots of ash, which in turn blocks the riddle grate further, lowering the amount of available oxygen to the coal.  Also, Coal has high levels of sulphurous compounds which will be emitted; these compounds are highly corrosive and will eat through the stove components and stainless steel liners in no time at all. The one exception to the wood underneath coal scenario is kindling a fire with wood, where it is very likely that the air intakes, or even the door, will be open in order to provide enough oxygen for both fuels for a limited time.

After reading the above, you will likely see the insanity of using both air controls at the same time while mixing different fuels. The appliance is very unlikely to have been designed to have both air controls open at once. e.g. If we have the wood air control open while burning coal, air will be drawn in above, where it needs to be below the grate, and so therefore the coal will never burn efficiently if at all.

A coal or smokeless coal Grate will be designed with open ‘fingers’ or large holes which allow air to enter from below. These often also have a griddle system which allows the removal of ash that will block the path of oxygen to the fuel if left.

A typical dedicated wood burning Grate will be flat with no holes below, modern stoves even consist of fire clay panels that are solid.  It is normal for wood to burn on a bed of ash, the ash acts as an insulator, protecting the base and also controlling the rate of combustion by not exposing the entire log to oxygen and heat at the same time. This way the wood can only gain oxygen from above and this will allow for a longer burn time!

The biggest cause of chimney fires is the way that the consumer uses their appliance, in particular where no liner has been installed. It is imperative to ingrain good burning practices. This information is not openly available and as such we; that is the stove and chimney professionals, have an obligation to both learn and impart this knowledge on our customers so that they are burning safely, efficiently and not unnecessarily harming our environment. At the Leeds Stove Centre, we believe in educating our customers before we sell a stove to them.

A stove that has been optimised to burn wood will not burn coal at the same efficiency. Multi-fuel stoves attempt to get around this problem by allowing you to operate the grate and air controls in different ways to suit the fuel you are burning. This compromise works well enough for many people but can never be as efficient as a dedicated wood burner, or a solid fuel stove run on the appropriate fuel. I hope this clarifies the correct method of fuelling your stove. For more information, call into the Leeds Stove Centre and chat to one of our staff.